working and Walking out

Its been an intensive period in the studio these last few months and i wanted to somehow record some of the dead ends that I go down to make work. Ive been walking every day and trying to record some of the the thoughts of things that i notice on those walks – often they are small things I notice, seemingly insignificant and yet they feel important enough to record in some way.

After the piece – Echo -shown in  Avignon Oct/Nov  I found a patch of enormous weeds ( flea bane ) they had gown in a cocooned space created by the forest fire of 2017 in a 20 meter square patch between burnt trees ( pine ) this seems to have protected them and they were at least 8ft tall – swaying gently with incredibly heavy heads which on examination were covered with greenfly and spiders. It gave a sensation of being a fish in a tank full of weeds wandering amongst them . I collected some and they have been sitting in my studio – 2 works have come out of it which are yet unresolved.  1 spayed piece similar to Echo leaving a trace of the touch behind – on black and white paper. 2. pigmented versions put through the press that resemble flocking and 3. Photographs of the roots which have gathered cobwebs.  At the time of writing this they have all stayed at this stage and so far i havent developed them further.

Pathways – Linked with this are the pathway etchings ive been doing. Similar to the weed experience I wanted to make small work on a grant scale – i came across a set of cliff walkways and this began this small series – at the same time perfecting my aquatinting techniques after Eliot Robinson came here for a week. The subtle changes in colour are something that interest me as well as the luminosity of the walk ways and the platform for viewing nature at a distance. 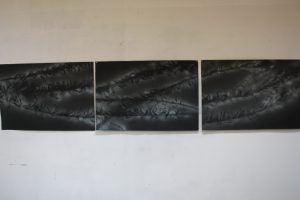 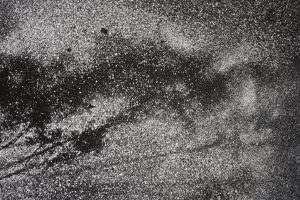 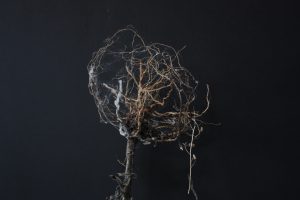 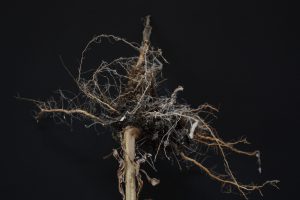 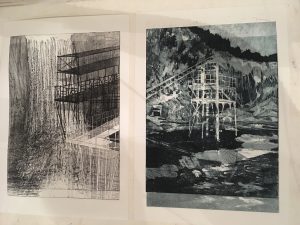 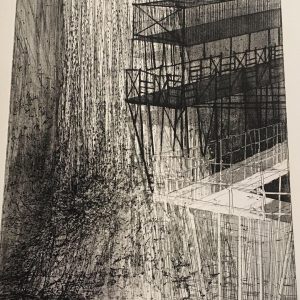